If you find yourself in Ashgabat this week... 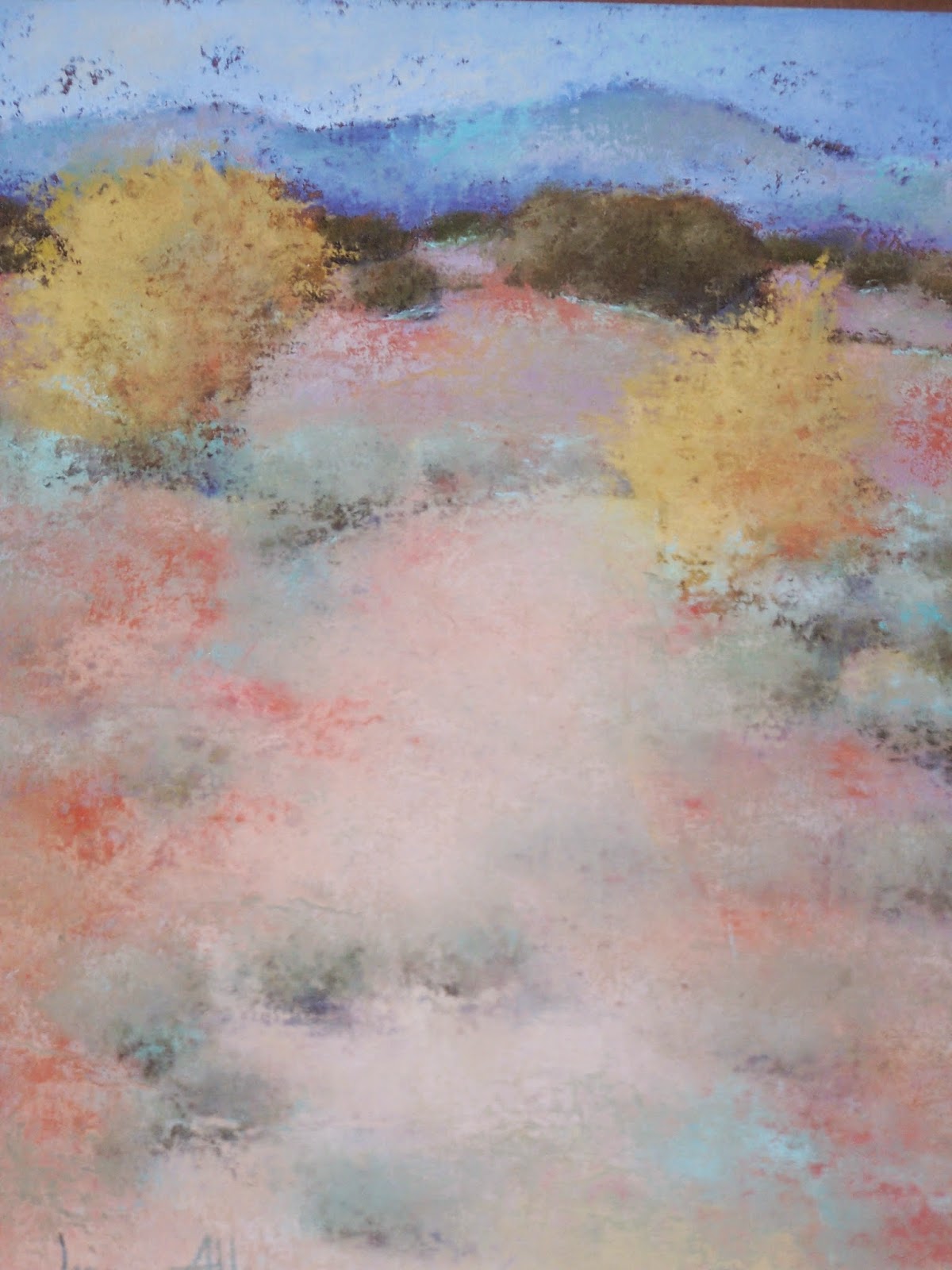 An artist friend in Albuquerque, Diana Stetson, has been in Ashgabat, Turkmenistan, this last week curating a show titled "The Spirit of Two Deserts"  at the Museum of Fine Arts.  Diana, whose work we have known and admired for almost twenty years, has made earlier trips to Turkmenistan as a cultural liaison.  Reproduced above is a painting that my wife Jeanine contributed to the show at Diana's request.

We could not, unfortunately, attend the opening.  But I am happy to add this to the "shameless plug" category.
Posted by rick allen at 5:28 PM No comments:

On the Day of the Armistice

This year is also the centennial of the outbreak of what contemporaries called the Great War.  For many historians it marks a major turning point in modern history, the end of the "long nineteenth century," (conventionally beginning with the French Revolution), and marks a particular end to a liberal vision of economic progress and the limitation of war through diplomacy.

On this day I usually re-read the last few paragraphs of Erich Maria Remarque's Im Westen nichts Neues (All Quiet on the Western Front).  Here they are in German.  I don't know where else in literature the unheralded change from first person to third is so poignant.

"I shall begin with our ancestors: it is both just and proper that they should have the honour of the first mention on an occasion like the present. They dwelt in the country without break in the succession from generation to generation, and handed it down free to the present time by their valour. And if our more remote ancestors deserve praise, much more do our own fathers, who added to their inheritance the empire which we now possess, and spared no pains to be able to leave their acquisitions to us of the present generation. Lastly, there are few parts of our dominions that have not been augmented by those of us here, who are still more or less in the vigour of life; while the mother country has been furnished by us with everything that can enable her to depend on her own resources whether for war or for peace. That part of our history which tells of the military achievements which gave us our several possessions, or of the ready valour with which either we or our fathers stemmed the tide of Hellenic or foreign aggression, is a theme too familiar to my hearers for me to dilate on, and I shall therefore pass it by. But what was the road by which we reached our position, what the form of government under which our greatness grew, what the national habits out of which it sprang; these are questions which I may try to solve before I proceed to my panegyric upon these men; since I think this to be a subject upon which on the present occasion a speaker may properly dwell, and to which the whole assemblage, whether citizens or foreigners, may listen with advantage."

Here Pericles veers toward what he suggests is conventionality, the praise of the ancestors.  Again there is some parallel in our own pre-eminent funeral oration:  "Fourscore and seven years ago our fathers...."

The reference to ancestors living in the land without any break ("αἰεὶ οἰκοῦντες," "ever living") has a significance that may not be readily apparent.  A.R. Burn, in The Classical Age (op. cit.) notes that this claim is made, not only by Pericles here in the funeral oration, but also by Thucydides himself in the first pages of his history, and that there was, among the Greeks a certain prestige to being a "native," to being "earth-born" from a particular location, from time immemorial, and that it was a claim that the Spartans, specifically, as Dorians, could not make.

Pericles significantly begins by praising the "ancestors, "προγόνων", but reserves even greater praise for "our own fathers, "οἱ πατέρες ἡμῶν."  The ancestors are to be praised for founding the city, but the achievement of the fathers, which here receives grater praise, is the "empire which we now possess," "ὅσην ἔχομεν ἀρχὴν."

"Empire" is not quite the right word, I think, for "arche," "ἀρχὴ," though it is the conventional one.  Empire conveys an impression of hugeness, the modern empires on which the sun never set, or the ancient empires, Rome or China, which dominated their own known worlds.  There is another connotation of the word, an assemblage of diverse nations, such as the Austro-Hungarian Empire.  And a third connotation, the notion in certain manifestations of Christendom that secular power was best unified in a Christian emperor set over other Christian rulers.

Obviously the Athenian "empire" was none of these things.  In size it was modest, and indeed dwarfed by the next-door Persian Empire.  It was an assemblage of Greek-only polities.  But it was this achievement of "arche" which Pericles most praises as the achievement of the fathers--not the ancestors.  There is a certain pride in the mere domination of other Greeks, and anyone having read the previous pages of the history will have known that it was this growing power of Athens that most disturbed the generally slow-to-act Spartans.

Nevertheless, he will "pass by" their recent history, for reason of everyone's familiarity with Athens' military valor.  Rather, he will concentrate on the unmilitary, the "unvalorous" causes of Athens' dominance,  "what the form of government ("ἐπιτηδεύσεως") under which our greatness grew, what the national habits ("τρόπων") out of which it sprang."

Posted by rick allen at 6:01 PM No comments:

I am continuing to read Karl Rahner's Grundkurs des Glaubens, a little over three quarters of the way through.  As I think I might have said in a earlier post, there's a dilemma in choosing whether to read a text like this in German or in translation.  My intermediate grasp of German makes my understanding undeniably inept at times, but at least I'm conscious of the uncertainly, which the reading of an expert translator might conceal.

Be that at it may, as I go through Rahner I start to get the impression that in some sense his method is a detailed, twentieth century application of the well-known aphorism from the first book of St. Augustine's Confessions:

God has "made us for himself," and we cannot rest apart from him.  In my last post on Rahner I had descibed his initial analysis of human existence and transcendence as a philosophical application of the thought of Kant and Heidegger to the relation of God and man, his initial portrait of God being thereby the quintessential "God of the philosophers," not yet the "God of Abraham, Isaac and Jacob."

But in another sense Rahner's analysis, though philosophical in form, seeks to give a rigorous exposition to something which, if not universal, is certainly widespread:  the feeling of God, the intuition of God, that conception of transcendence that comes, not from Kantian analysis, but but from the mere everyday experience of human life, human freedom, human wonder at the world.  Religion, in fact, is not some hobbyhorse of the leisured.  For rich and poor, ruler and ruled, sophisticated and naive, the sense that the world is filled with God (or gods) runs throughout history and around the globe.

So, though Rahner indeed takes as his starting point some rather daunting analyses from technical Western philosophy, in language that few have the training to understand comfortably, he uses those categories to try to express an experience that is almost universally human.  In that sense his "God of the Philosophers" intends to capture, not just the sense of the "God of Abraham, Isaac and Jacob," but the divine sense wherever human beings may locate it.

That wideness is his starting point, not the realm of the Christian faith, or the Catholic Church.  As a Christian, though, and as a Catholic, he has to then bring that general sense back to the Faith, so that his analysis indeed leads to what he aims for in his subtitle, "An Introduction to the Concept of Christianity," not simply an introduction to the concept of religious transcendence.

So his method aims to connects up the general to the particular.  If the sense of the transcendent indeed comes into history, it does so in terms of the Christian concept of God.  If that historical breakthrough is to achieve full concreteness in some form of "Heilbringer," savior or bringer of holiness, we can find such a historical fulfillment uniquely in the life and work of the man Jesus of Nazareth, the Christ.

This is the concept of the "anonymous Christian" popularly identified with Rahner.  The felt transcendental relationships are in fact relationships to the Trinity and the incarnate Son, whether acknowledged or not.  Whether those relationships are ever explicitly realized by the individual is a separate question from whether they exist, whether they are real, whether they are salvific.  Here we come back to St. Augustine.  It is not simply the Catholic who is made for God.  It is not only the Christian who cannot find rest outside of God.   And this sense of recognized devotion to the unknown (or denied) God relates and is affirmed by the important, if not novel, assertion of Vatican II, in Lumen Gentium, the Dogmatic Constitution on the Church: