A postscript on Newman 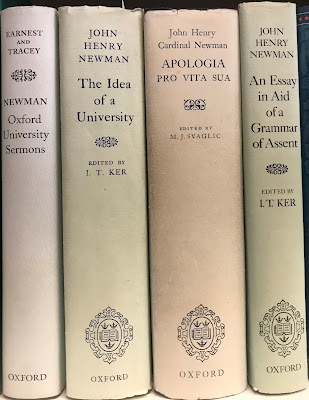 Two posts back I had mentioned my failure thus far to make any headway with the Grammar of Assent.  Having so confessed in public made me think I ought to give the thing one more serious try, and to encourage that resolve I did a few web searches looking for contemporary discussions of it.

I didn't find that many, but I did run across the selection below, part of a 1990 talk by then-Cardinal Ratzinger.

Now I am always reluctant to just post other people's work here.  For whatever reasons of vanity or self-importance I like to make this a place for my own observations and associations.  But the selection below seemed such an apt expansion, an enlargement of that whole idea of change and development, reflecting not only what I have experienced in myself, but what I believe I have seen in others, as the ideas and convictions of a lifetime are long pondered, and then have their effect.


"It is known how Newman's insight into the ideas of development influenced his way to Catholicism. But it is not just a matter of an unfolding of ideas. In the concept of development, Newman's own life plays a role. That seems to become visible to me in his well-known words: "...to live is to change, and to be perfect is to have changed often".

"Throughout his entire life, Newman was a person converting, a person being transformed, and thus he always remained and became ever more himself.

"Here the figure of St Augustine comes to my mind, with whom Newman was so associated. When Augustine was converted in the garden at Cassiciacum he understood conversion according to the system of the revered master Plotin and the Neo-Platonic philosophers. He thought that his past sinful life would now be definitively cast off; from now on the convert would be someone wholly new and different, and his further journey would be a steady climb to the ever purer heights of closeness to God.

"It was something like that which Gregory of Nyssa described in his Ascent of Moses: "Just as bodies, after having received the first push downwards, fall effortlessly into the depths with ever greater speed, so, on the contrary, the soul which has loosed itself from earthly passion rises up in a rapid upward movement... constantly overcoming itself in a steady upward flight".

"Augustine's actual experience was a different one. He had to learn that being a Christian is always a difficult journey with all its heights and depths.

"The image of ascensus is exchanged for that of iter, whose tiring weight is lightened and borne up by moments of light which we may receive now and then. Conversion is the iter - the roadway of a whole lifetime. And faith is always "development", and precisely in this manner it is the maturation of the soul to truth, to God, who is more intimate to us than we are to ourselves.

"In the idea of "development" Newman had written his own experience of a never finished conversion and interpreted for us, not only the way of Christian doctrine, but that of the Christian life.

"The characteristic of the great Doctor of the Church, it seems to me, is that he teaches not only through his thought and speech but also by his life, because within him, thought and life are interpenetrated and defined. If this is so, then Newman belongs to the great teachers of the Church, because he both touches our hearts and enlightens our thinking."

Posted by rick allen at 8:57 PM No comments: