Moriae Encomium; or, Laus Stultitiae; or The Praise of Folly; or, Stupid talks up Stupid 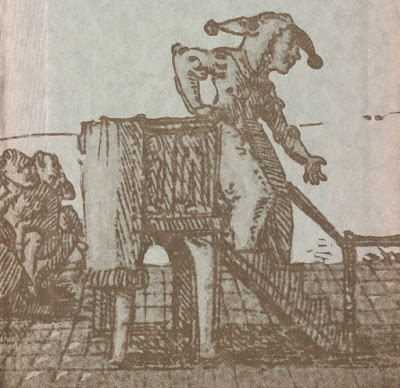 You may have guessed from the title of this blog that I am a longtime fan of Erasmus' famous declamation.

Why?  I think it captures and expresses a number of important truths, put in the guise of a lengthy jest, under multiple layers of irony, in a form common enough in its day, but rarely used in our own.

The title alone gets us started.  "Moriae" is Greek, "Stultitiae" Latin, typically translated into English as "folly," "foolishness," "stupidity."  The term "folly," perhaps party due to standard translations of Erasmus, has acquired a kind of polish; "foolishness" and "stupidity" less so.  But however turned into English, moria is not normally praiseworthy.

And then there is that "ambiguous genitive."  The title suggests that someone is praising folly.  But, read another way, some encomium, some laudatory oration, is being made by folly, folly as the subject praising.  In contemporary English we do not typically personify abstract moral and intellectual qualities--but not so among Renaissance humanists, who breathed the atmosphere of a revived paganism, and whose mental universe was full of gods and goddesses embodying abstract ideas, and for whom Folly was (or could be) a goddess.

(And Folly is a goddess rather than a god because "moria" in Greek and "stultitia" in Latin are both feminine nouns.  Does this make Erasmus a misogynist, as some have asserted?  Not necessarily, since Sophia--Wisdom--is also feminine, and hence also a goddess.)

So, how do we take it when Stupid praises Stupid?  With an enormous grain of salt.

This set-up, it must be said, is first of all a protective device.  Princes and prelates had various means at their disposal to punish those who wrote against them.  Putting the whole declamation into the mouth of Folly gave Erasmus a little deniability.  "Did I offend?  Look at who's speaking!"  As Erasmus writes in his dedication to More, "pulchrum esse a Stultitia vituperari."  To be called a fool by Folly is surely great praise, yes?

And yet Erasmus is doing more than protecting himself.  He is going to play with the various meanings and connotations of foolishness that may indeed be praiseworthy, but may be beneath the notice of the wise

So first he delves into the folly of love--erotic love, romantic love, the love of children.  What is Erasmus' sternly dignified  Stoic to do when he falls in love, when he wants children?  It's not that mighty brain, Folly notes, with which one procreates children.  What foolishness love is--but how worthless human life is without it.

Plato called love a divine madness, so Erasmus veers into the subject of whether the mad and the stupid are happier than the sane and the learned, and this gives Erasmus, the life-long student, who never in his whole life had a secure position, scope to expound on the miseries of the poor, neglected scholar.

There is then a long excursion into the various professions, the warriors, the lawyers, the philosophers, the theologians, the princes, the prelates.  All are held up to merciless ridicule, again and again because their logic, their quibbling, their learned distinctions--in short, the various conventional demonstrations of their superior wisdom, show them in fact to be fools.  What have a lawyer's subtile distinctions to do with justice?  Or the unfathomable arguments of the theologians with faith, hope and love?  Or the pride, display, and arrogance of bishops and cardinals with the humility and self-giving commanded by Jesus?

But as Erasmus approaches the end, he turns to an encomium on the foolishness of faith and devotion.  Ranging through the scriptures, he repeats St. Paul's rhetoric about the foolishness of God, and the folly of the cross.   He notes the praise of the child-like and the seemingly absurd condemnation of seeking after the world's rewards.

At this point, of course, things come quickly to an end--before the declamation becomes a sermon.  We can't be too surprised.  Erasmus is, after all, a cleric himself, and a professed religious (though a runaway who hated the cloister).  He may have been the greatest scholar of his age, editing the ancient Latin classics, producing the first accessible printed Greek text of the New Testament in the Latin West, publishing  guidebooks for improving  one's style.  And he was a theologian--just not a scholastic one.  His Handbook for the Christian Soldier promoted a Christian philosophy for the devout laity, emphasizing the simplicity of the written gospels over the ceremonial devotion so characteristic of the later Middle Ages.

But then along came Luther.  The Moriae Encomium was published in 1509.  In 1520, Luther publishes his Freedom of a Christian, Address to the German Nobility, and Babylonian Captivity of the Church.  The gauntlet has been thrown down--a gauntlet Erasmus never had any intention of throwing.  His refusal to cast his lot with Luther was puzzling.  Had they not said the same thing about the fat prelates, the corrupt abbots, the hypocrites, the time-servers and the wolves in sheeps' clothing?  Yes, indeed.  But it is part of Erasmus' foolishness to see that such folly is not going to end when new prelates are installed.   "I have never entered their churches, but I have seen them return from hearing the sermon, as if inspired by an evil spirit, the faces of all showing a curious wrath and ferocity."

So the time of jesting came to an end.  Erasmus was held in such esteem during his lifetime he was offered a cardinal's hat (he turned it down).  Shortly after his death his Moriae Encomium was put on the newly-created Index of Forbidden Books.  Europe was moving into a century of religious war.

It is ironic, perhaps, that the doctrine of original sin, so emphatic in Protestant theology in Luther's Bondage of the Will and Calvin's notion of total depravity, also grounds Erasmus' broad tolerance of human folly.  Individuals can improve, but foolishness is part of the human condition, and attempts to wrench it out or tamp it down are doomed to failure.  We can't eradicate stupidity, but we can laugh at it.  That may be the best we can do.

It some ways Erasmus' exultation of folly mirrors the nineteenth century's Romantic Rebellion against the the eighteenth century's Age of Reason and Scientific Revolution.  Reason and science are tremendous, but they cannot be the whole of human life.  Neither, of course, can folly, even in its more benign forms.  God knows we live in a time when ignorance is flaunted, science derided, and the great freedoms won in the Age of Reason under siege.  Stupidity simple and unadulterated produces hatred as well as love, tears as well as laughter.

But, ultimately, the folly that Erasmus truly praises is like the wisdom of Socrates.  The Delphic oracle proclaimed Socrates the wisest of all men.  Unconvinced, Socrates spent the rest of his life seeking out those thought wise, and questioning them, and finding their reputations overblown (and making quite a few powerful enemies in the process).  He concluded that he was the wisest man because he knew nothing, and knew he knew nothing, whereas those reputedly wise also knew nothing, but did not know they knew nothing.  It was an ignorance won after study and reflection.

At the risk of multiplying examples, consider Newton, one of the few incomparable geniuses of human history, comparing himself to a child picking up seashells on the beach, with the great undiscovered ocean of truth before him.  The more we know, the more we know that we don't know.

So the irony of Erasmus is never cynicism, or despair.  There is a claimed worldly wisdom in becoming corrupt to fit into a corrupt world, a corrupt church.  Erasmus suggests that the better way is the foolishness of love, friendship, faith, devotion and the pursuit of truth.  The world is what it is, but we ourselves remain free to choose the good, the true and the beautiful, with God's help.  It is for this vision of Christian humanism that I hold in such esteem the runaway monk of Rotterdam. 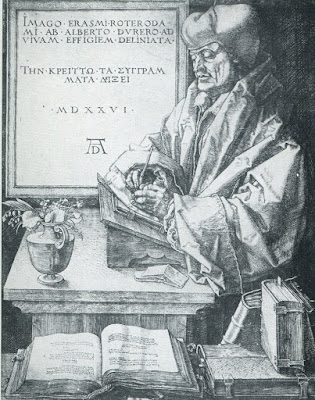