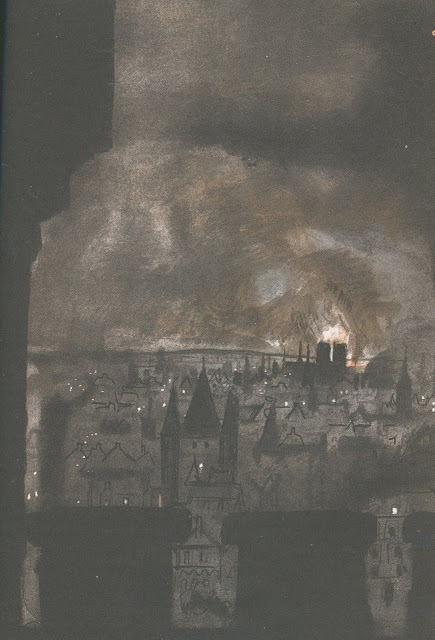 The Dropping of the Other Shoe 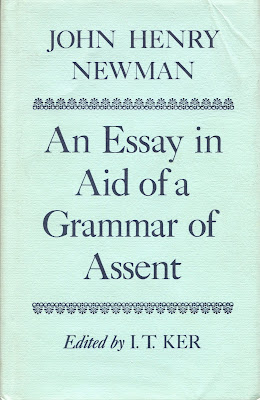 It is, to begin with, a curious title.  "An Essay...."  Newman had before entitled a book-length treatment of a topic an "an essay" in his Essay on the Development of Christian Doctrine.  But here the genre seems, in one sense, strikingly inapt, and, in another, spot on.

Unlike a "monograph," or a "treatise," the word "essay" suggests a particularly personal reflection on a subject, and a perfunctory glance at the table of contents seems to put this work far outside of that category:  "Modes of apprehending Propositions;"  "Notional and Real Assents contrasted;" "Indefectibility of Certitude."  It looks more like a treatise--an extraordinarily dry treatise--on epistemology than an essay.

But in another sense, what Newman is doing here is precisely what an essayist in the mold of Montaigne is doing.  He is taking himself as his subject matter, looking at and describing his own mind, not in the manner of a mystic, but in the ordinary sense of trying to set out exactly what is happening in one's own mind, in one's own consciousness.   " Ainsi, Lecteur, je suis moy-meme la matiere de mon livre."

An essay on what?  Assent.  Assent to propositions.  And let it be said up front, since this is a book by Blessed Cardinal Newman, who, I understand, was approved for canonization just this last February, the first post-seventeenth century Englishman so recognizaed, that, though we are, yes, commencing with all assent in general, Newman is most particularly concerned with religious assent, intent on defending, as the essay proceeds, the justification for religious belief in an increasingly doubting world.

But what is a "grammar of assent"?  He is first talking about a way to talk about assent, trying to define his terms precisely so that he may describe it.  That's not exactly "grammar," but there is perhaps an analogy in that we divide grammars into "descritive" and "prescriptive" grammars--how one does use a language versus how one ought to use a language.  Newman is very clear that he is on the "descriptive" side, wanting to describe how a mind, his mind, arrives at assent.  If he were German he might call it a  "phenomenology of assent."  But note that his assertion that he is describing the phenomenon of assent will not not keep him from criticising, later, what he understands as Locke's "prescriptive grammar"--i.e., Locke's (and much of the modern world's)  strictures on how one should and should not assent.

And there is also that note of modesty, of tentativeness, perhaps of a hope that his "grammar" will be taken and further developed:  "in Aid of."  A contemporary writer might title it:  "Toward a Grammar of Assent."

So it is a very personal book, his own take based on his own long-pondered and painstakingly-written and re-written thoughts, not primarily a response or entry into a pre-existing controversy.  Nevertheless, like the Essay on Development it is a book coming out of his conversion--how does one believe, how does one justify belief, or change of belief?  And how can I be certain now of what I profess, when I was equally certain that what I professed before was true?

The long and the short of it?  It's obviously impossible to do justice to the detailed and careful course of Newman's argument.  But one of his primary points is that, pace Locke, there are not degrees of assent, and we are not obliged to give a higher degree of assent to those which rest on formal demonstration.  To give an example (my own, not one of his), I do not experience a greater degree of assent to the proposition that there is no highest prime number than to the proposition that my children love me.  The first can be shown with a brief and beautiful proof.  The latter?  Well, my reasons tells me that, yes, I could indeed be like King Lear--but in fact I do not doubt, and I am as certain of the second as of the first.

Newman treatment of "certitude" is one of the more surprising, counter-intuitive parts of his argument.  He distinguishes it from infallibility.  He cannot deny that we are often mistaken about what we are certain about.  But he insists that the human mind is made to rest in certainty, and he further maintains that we are justified, by that psychological fact, in being certain about, in believing,  any number of things which cannot be demonstrated logically or scientifically.  And we do that through the exercise of what he calls the "illative sense," a comprehensive, largely unconscious synthesis of antecedent judgments.

This sense operates just as fully in an uneducated laborer as in a trained philosopher.  And that has to be so, unless we are to concede that belief in God is deficient in one who can't follow the higher flights of speculative reason in a Spinoza, a Kant, a Rahner or a Newman.  Ultimately, to come back to Newman's primarily religious concern, our spiritual beliefs are not philosophical or scientific in nature, and it is our attempt to re-cast them and justify them in those terms which sets up the conventional conflict between religion and reason, a conflict which Newman insists is an illusion.

And here my own thoughts turn strangely to Newman's contemporary Kierkegaard.  In most senses these two men, and their thought, are poles apart.  And yet there is an odd convergence in this notion that faith (as Kierkegaard calls it) and belief (as Newman's prefers) do not authentically arise out of logic, demonstration, science, but from untraceable sources that issue in a firm and life-changing conviction.  Newman, I imagine, would have drawn back from Kierkegaard's "leap;"  Kierkegaard, I imagine, would have been repelled by Newman's almost Olympian ease in Zion.  But we can do no more than imagine.  There was no engagement.

The book ends with a lengthy apologia for the Christian faith, very traditional in form, making first a case for natural religion, and then arguing that Christianity is the one true revealed religion that natural religion points to.  It does not claim to be a demonstration of the truth of Christianity so much as a roster of antecedent justifications that make embracing it, with certitude, a fully defensible act, under the terms of the preceding pages.  In some ways it is reminiscent of Pascal's specific defense of Christianity in the Pensees, a defense less remembered and honored than the harrowing description of the human condition forming its preface.  Newman's essay is often treated primarily as an epistemological treatise, but his aim coincides with that of Pascal, to assert that the heart has reasons that the reason cannot understand, and that insight into our own very human constitution will take us to God.
Posted by rick allen at 11:14 AM No comments: 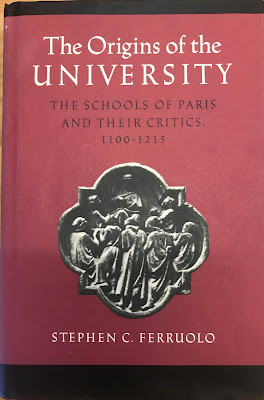 For many years I have heard the term "twelfth century renaissance," but have never really understood the rationale for it.  More recently, for personal reasons, I've become interested in the origins of the University of Paris, and the connection of the two.

A "renaissance" is a not just a cultural flourishing, but some kind of re-birth, a recovery of the past, over and above the usual process of re-appropriation and re-consideration that is a normally continuous aspect of cultural life.  What sets the twelfth century apart?  The events I associate with that century--the foundation and fall of the crusader kingdom of Jerusalem, the careers of Peter Abelard and Bernard of Clairvaux, the murder of Becket--are significant, but not outstandingly indicative of any sort of  re-birth.

There was, at this time, a European recovery of Aristotle that had long-range implications for a new conception of science.  But I think what was distinctive was not so much the "what" that was brought forward as a new "how" that would institutionalize appropriating the past.  In other words, what was developing rapidly was a new approach to education--the University.

"Universitas" in the middle ages didn't originally carry a strictly educational meaning.  It referred to any kind of conglomeration of professions or persons that for whatever reason became recognized as a free-standing institution, like our word, "corporation."  Peter Abelard, in the early twelfth century, was a teacher, attracted to a Paris where already one could make a reputation, and a living, among  competing masters in a variety of scholastic settings.  Within a century there was an established institution, the University of Paris, chartered by a papacy far enough away to give it a significant degree of independence from the crown, and the local bishops, and the monastic establishments that hitherto dominated education.

The subjects were not new, but their integration into a single institution was.  One began with the seven liberal arts:  the trivium (grammar, rhetoric and dialectic) and the quadrivium (arithmetic, geometry, music and astronomy).  These prepared one for entry into one of the three higher faculties:  law, medicine or theology.

The theology faculty of the University of Paris soon became a powerful, if non-magisterial, voice in Christian theology, hosting epochal thinkers like St. Albert the Great and St. Thomas Aquinas in its first century, in the formative years of what came to be called, for obvious reasons, "scholasticism."

But the "baptism of Aristotle" was not the only landmark "re-birth."  Consider this quotation from the great English legal historian William Maitland: "Of all the centuries the twelfth is the most legal.  In no other age, since the classical days of Roman law, has so large a part of the sum total of intellectual endeavor been devoted to jurisprudence."  The study of the law does not sit comfortably with my ordinary notion of what is fit matter for a "renaissance" (and I remind my readers, I am a lawyer myself).  But as the University of Paris was forming, another university, the only university vying with Paris for the honor of "first," Bologna, was attracting legions of students to the lectures of Irnerius on the newly re-discovered Digest of Justinian.  And as the "second life of Roman law" formed the foundation for modern Continental Law, the foundation of English common law was being established in England under Henry II, and canon law was taking a systematic form in the Decretum of Gratian--all in the twelfth century.

But, to return to Paris, Stephen Ferruolo's book, as you might glean from the subtitle, focuses as much on doubts about the New Education as on its development.  The monastics saw it as fostering spiritual pride.  The humanists took it to task for channelling the best and the brightest into the more lucrative callings, medicine and law.  The moralists looked with a jaundiced eye on the natural result of hoards of ungoverned young men exposed, far from home, to the vices of an incipient metropolis

These are all issues still relevant to contemporary education.  But there is another, suggested by the title of this post:  Scientia donum Dei est, unde vendi non potest.  Knowledge is the gift of God, and therefore cannot be sold.  Already in the twelfth century there was unease with the idea of turning the divine gift of knowledge into a marketable commodity.  The occasional papal prohibition or royal regulation had little effect, and though the workman is undoubtedly worthy of his hire, our contemporary American problem with education is not so much with its content as its cost.  Our educated young people often leave the university saddled with debts that may take half a lifetime to repay, or longer.

I can't suggest a concrete solution, but I can note that tuition at the University of Paris is still less than four hundred dollars per year.  This is, unhappily, about to change for foreign students.  Last fall the Prime Minister announced that, for non-EU students not yet enrolled, tuition would increate about fifteen-fold.  That's still a bargain, compared to what comparable universities charge in English-speaking countries.  But it highlights the challenge of how we collectively value learning, and what other costs we suffer when we fail to educate our people. 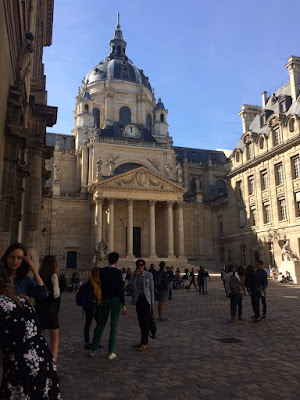 Posted by rick allen at 7:23 AM No comments: