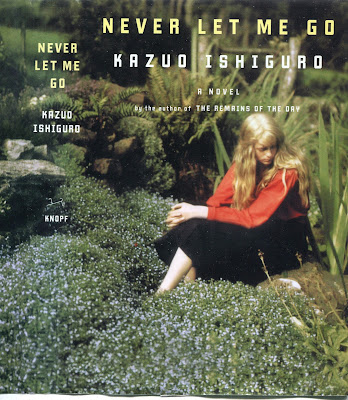 It's always a question whether a novel has been long enough in the world that its "twists" should be discussed without some sort of spoiler alert.  Never Let Me Go is probably a novel best experienced with no expectations.  But I didn't read it that way, and the gradual "reveal" of the novel's fundamental premise isn't, ultimately, what the novel is about.  So I suppose I should say, "spoiler alert" for those who wish to read the novel (or see the movie) without preconceptions.

I've never read Ishiguro before this, except through the indirect medium of the film treatment of his Remains of the Day.   I think you would call Never Let Me Go dystopian fiction.  It takes place in the immediate past of the 1970's through 1990's, but in an alternative past, which began deviating from our own in the 1950's.  In the world of the novel a number of medical breakthroughs after the second world war, centered on organ transplanting, led to a dramatic decrease in human mortality, and a considerable lengthening of human life-spans.  Hand in hand is a precocious advance in cloning technology.

But the novel begins with with no references to these changes, or any clues, for quite some time, that it takes place in any but our own world.  It begins as our narrator, Kathy, looks back on her childhood at a boarding school, Hailsham, and her story revolves around her best friends  Ruth and Tommy, following conventional lines of friendship and jealousy among children and teenagers.

But fairly early we also begin to glean the meaning of Hailsham--it is a school for clones, who are given a happy and healthy childhood before, in their twenties, beginning their "donations"--the removal of increasingly vital bodily organs, so that the second or third donation is invariably fatal.

The details of this horrifying premise are only slowly sketched out, to the reader as to the characters.  But, unlike the reader, the characters are brought up to accept their fate as normal.  And quite differently from most dystopian novels, where the protagonists rebel and resist when they realize the true extent of their predicament, there is little more than sadness and regret among these young people as they approach the predestined ends of their lives.

It is this acceptance of their fate, and the acquiescence of those shamefacedly but unhesitatingly shepherding them toward it, that gives the novel, for me, its bitter bite.  Ruth in particular expresses anguish, in one scene only, at first seeing herself as something to be used and thrown away, and is shocked and dismayed to find out that the outer world has occasionally taken a mild interest in whether the clones might possess souls.  Much of the dramatic tension of the novel turns on the hope that those who show evidence of a soul might earn a temporary reprieve-- a year or two of adult happiness.

There is one convention that Never Let Me Go does share with other dystopian novels--the final scene where the protagonists ask their questions and receive explanations.  Here, almost at the end, the young people learn from their now-retired headmistress something of the ambivalence of the outside world toward them, of the debates about--not the morality of what is done to them--but how they should be treated, what dignity should be accorded them, over their short lives.

But one consideration trumps all:  "How can you ask a world that has come to regard cancer as curable, how can you ask such a world to put away that cure, to go back to the dark days?"  This is how what, to the reader, is plain murder, the preying on the young for the gratification of the old, becomes unquestionable.  The headmistress was one of the good people, founding Hailsham as an experiment in giving the clones happy lives, meaningful human lives--an experiment apparently in the process of being rejected.    But even for these reformers, these tender good people, the students must, regrettably, give up their lives.

And that, to me, is the greatest horror of the novel, that apparent plasticity of right and wrong, the common acceptance of the once-unthinkable when some great benefit beckons, the ease with which a world murdering its young can't bear to return to what it thinks of as "the dark days," and the inability, ultimately, to distinguish the light from the dark.

These themes underly a quiet, subtle and thought-provoking story, which I heartily recommend.

I should add that the novel has been made into a movie, a pretty good one, but one, typically, falling far short of the book.  The movie, not surprisingly, emphasizes the love triangle.  That's there in the novel, but with a really more interesting "friendship triangle" going the conventional way only toward the end.  But I also found in the movie's last scene a sort of pulling back, a substitute gee-don't-we-all-really-live-brief-lives meditation that unforgivably blunted the hard questions of the novel.