Our "Muslim Problem," Part One: Overview 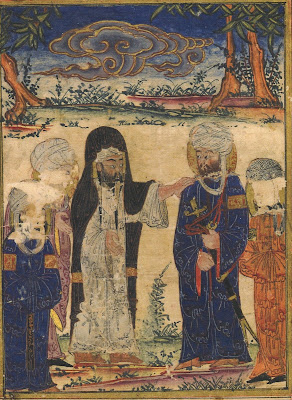 I have long intended to write something about Islam and the contemporary West.  Recent events have suggested that perhaps now might be a good time.

I have no particular expertise in the subject, only what I know of history, and my own limited experiences.

I put the "Muslim problem" in "scare quotes" because some recent reading from the early twentieth century, where a widespread concern with what they called the "Jewish problem" was evident.    What to do with them?  How do they fit in, these non-Christian interlopers, these wealthy money-lenders,  these superstitious, clannish Eastern strangers with their own Law and their own language--in short, how to deal with these people whose whole existence contradicts the contemporary notion of the integral, ethnic Nation?

Most people with any sense of decency look back at that time with shame and alarm for what we know followed.  Our "Jewish problem" turned out to be mostly a problem with ourselves, and my general take is that our "Muslim problem" is largely little different, though the two situations plainly are not entirely the same.

Our modern anxiety stems from the unavoidable fact that the boundary between Islam and the West becomes less distinct year by year.  There was always conflict along the boundary of the two civilizations, and the boundary sometimes moved dramatically.  But the two civilizations did not mingle in any significant fashion until the imperial West first conquered large portions of the Islamic world, beginning with Napoleon, followed by a significant, if still relatively small, intermingling of the populations as imperialism retreated.

What that means is that the violent disorders that have characterized the middle east and southern Asia over the last fifty years--disorders for which the Western powers plainly share some significant part of the blame--are spilling over into the West.  And that in turn has given rise to a widespread fear that that exported violence is not simply the "outskirts" of the current wars, but somehow intrinsic to Islam, that they are skirmishes in an ongoing war between Islam and the West which has to be prosecuted by punitive measures against Muslims in the West and by barricading the borders.