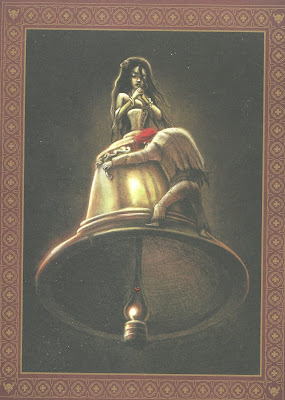 I have just recently finished Hugo's Notre-Dame de Paris.  Its title of course somehow got into English as The Hunchback of Notre Dame, which is curious because, as I think I noted in an earlier post, Quasimodo, the poor deaf bell-ringer, though an important figure in the novel, is by no means the center of it.  Surely that role has to be assigned to Esmeralda.

It is in many ways a mess of a book--lurid, garish, twisted and, in the end, wrenchingly cruel.  When I first read it, in English translation, I found it awkward and melodramatic, almost embarrassing in its studious and unrelenting pursuit of the picturesque and grotesque.  In French--perhaps because of my elementary grasp of the nuances of the language--I found it touching, and often moving (though I never caught myself on the verge of weeping, as I did at the conclusion of Les Miserables).

As I indicated above, there is less a protagonist that a central figure, Esmeralda.  She is the sun around whom the other characters revolve:  Pierre Gringoire, the poor student-poet with whom she makes a nominal marriage in the Cour des Miracles, to prevent his being hanged by the Truands; Claude Frollo, archdeacon and alchemist, seized by a relentless and murderous lust; Phoebus de Chateaupers, the callous young captain whose attempted seduction leads to her death sentence, and of course Quasimodo, to whom she shows mercy on the pillory, awakening a tender (and ultimately futile) care and a painful deepening of his isolation.

This is a narrative form that is echoed in other well-known French works.  In Madame Bovary--in approach as different a novel from Notre Dame as imaginable--there is again a central female figure, Emma, married to the hapless Charles, seduced by Rudolphe and Leon, and financially ruined by Monsieur Lheureau  Or in film, in Carne's great Les enfants du paradise, the courtesan Garance is pursued by the mime Baptiste, the actor Frederick, the thief Pierre, and the aristocrat, Edouard, compte de Montray.  And at this risk of dragging this out even Bertrand Blier's mid-seventies farce, Preparez vos Mouchoirs comes to mind, the baffling melancholy of the beautiful Solange leading to increasingly desperate measures from her husband Raoul, his newly acquired Mozart-obsessed pal Stephane, and their unnamed neighbor, ending in the unforeseen machinations of a Mozart-like pre-teen prodigy, and seducer.

In the Greek word for fate, necessity, compulsion, bondage, fatality, Hugo seems to anticipate Burkhardt's assertion that only after the Renaissance did the "individual," in the modern sense, appear.  Hugo characters here are more "types" than individuals, some would say stereotypes, the puppets of a medieval mystery imagined by a humane progressive of the nineteenth century.  In contrast to the theme of redemption in Les Miserables, these characters seem doomed from the start.

And yet they continue to live, even if in odd forms.  Film has loved this story, and though I've seen bits and pieces of the classic treatments starring Lon Chaney and Charles Laughton, I've never been able to sit through either film in its entirety.  Neither have I seen the cartoon musical put out by Disney.  But, having read a plot summary, I'm afraid a lot of kids are going to be in for a shock when they decide to go on to the novel.

NOTE ON THE PICTURES:  The exotic world of Notre Dame de Paris has always attracted illustrators.  The edition I just completed was published by Collection Metamorphose and extensively illustrated by Benjamin Lacombe.  I have already used a few of his images in this blog, a shot of the cover at the end of the post for October 14, 2015, another on July 7, 2017.The image at the top of this post is also from Lacombe.  Very different, but equally arresting, is the set of illustrations made by Bernard Lamotte, taken here from an English translation published by the Easton Press.  Three of those illustrations are reproduced below. 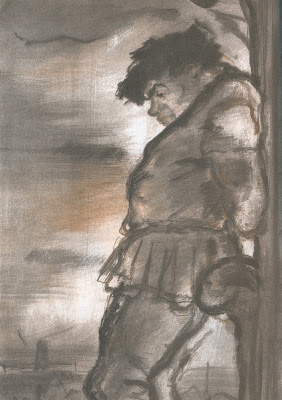 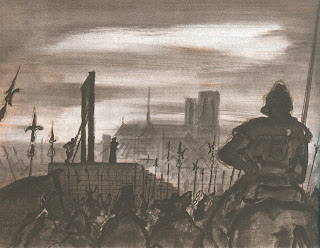 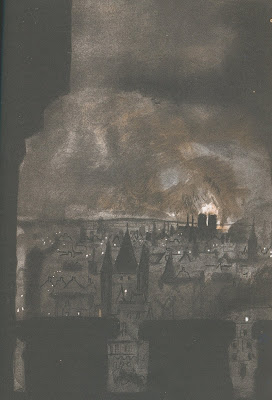