St. John and the Dragon 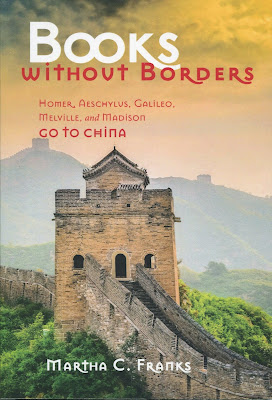 On a few previous occasions I've noted surprising juxtapositions of conventionally different worlds.  In that vein I've just completed the book pictured above, in which, for two years, high school students in Beijing were introduced to a Western liberal arts curriculum, taught in the manner of the two St. Johns Colleges in the U.S.--reading and discussing the "Great Books" only, without lectures, without textbooks, without testing to winnow out right from wrong answers.

My interest in the book is personal.  Martha is both a friend and a professional colleague.  Though both she and her husband Grant are tutors at St. John's College here in Santa Fe, her occasional references in the book to being a lawyer rather underplay her well-known local expertise and experience in water law ( to follow Will Roper, "a study in effect able to occupy the whole life of a man").  Though never a teacher I would hope the contents of the blog suggest a similar love of the humanities, and the particular merit of this volume is its hazarding on introducing a liberal arts curriculum in modern China at a time when, here in the West (certainly not the first time), the relevance, the utility, the worthiness of the old canonical texts are seriously questioned.

And the cultural clash is three-fold.  We have first, most obviously, portions of the Western "canon" being taught in China, with India one of the two great foci of ancient Eastern civilization.  But it is also Communist China, an Eastern civilization professing to adhere to a distinctly Western ideology, the nineteenth century German dialectical materialism of Karl Marx, as mediated by Mao, still ubiquitously celebrated as the "Great Helmsman."  But, finally, this is decidedly "post-Mao" China, which, if not exactly capitalist, officially celebrates the pursuit of individual wealth and innovation, if still under an authoritarian government and Party.

So when these high-achieving high-schoolers are asked, "Is Agamemnon a good king?"  Or "Is Achilles right to withdraw from the fight after being dishonored?", they are challenged, first, by questions to which they are told have no "right answers"--a disconcerting assertion in a school system ruled to a very high degree by the assumption that successful test-taking  is the be-all and end-all of education.  (Would that that attitude were not gaining ground here in the West!).  But they also bring the assumptions and values of an upbringing informed by traditional Chines values, and Communist values, and the newer and somewhat contradictory values of steel-eyed competition and individual achievement.

It is in the recorded dialogues with students that the book most shines.  Should Agamemnon have sacrificed his daughter for favorable winds?  No, that was murder.  But, as king, shouldn't he have put the good of his people, his army, over that of his own family?  Who determines what is good, the individual or the collective?  And how is what is right determined, whoever makes the decision?  Agamemnon killed his daughter Iphigenia, his wife Clytemnestra killed him, her son Orestes killed her.  Should the avenging wrath of the Furies be restrained?  In these and many other questions these students, after being prompted out of their habitual silence, take on each other with argument and counter-argument, appealing sometimes to the conformity encouraged by an authoritarian state, sometimes to a revolutionary fervor which doesn't quite always lie dormant, and sometimes to lingering implicit traces of long-suppressed Confucian ideas of propriety, inquiry and humanity.

We so take for granted that we can have these kind of discussions that we mostly simply don't have them at all.  In China there are strong (if largely unspoken) memories of the Cultural Revolution among the old and an uneasy consciousness of the Tiananmen Square protests among the students.  On occasion a group of observers from the Party will stop by and discussion is immediately dampened (Sinister?  Yes, but of course the same thing happened when our parents entered the room when we were teenagers.)  Discussion of the separation of powers doctrine grounding the U..S. constitution leads unexpectedly to a consensus that that just showed how much more corrupt the West must be than China.  And perhaps most surprisingly, when it came time to read the Communist Manifesto, none of these children of the revolution had read it, or could easily grasp what it was all about.  When pressed about what they really wanted from life, it was money, fame, maybe being a rock star.  So much for communist indoctrination.

I could go on and on.  As at St John's, science is approached, not through textbooks, but through reading Galileo, Newton and Darwin.  And science as a practice and a method raises many of the same kind of questions as Greek drama:


There are visits to the Great Wall and the Forbidden City and the home of Confucius, academic conferences and brief excursions into the Chinese classics, wonder at the differences and wonder at the similarities--in short, a juxtaposition of many marvelous new ways of seeing East meet West (and the Young meet the Old).

I do recommend my friend's surprising and enjoyable book.  It's locally published, so not available from vendors such as Amazon,  It can, however, be found at www.respondeobooks.com, under "New Products," for anyone interested.

Posted by rick allen at 4:25 PM No comments: