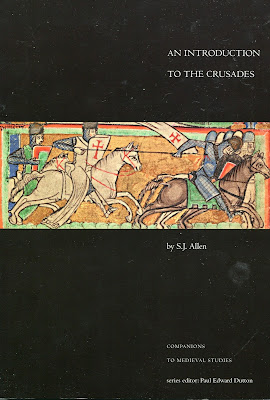 I am happy to note the publication of a new book by Dr. S. J. Allen, also known to me as "my little sister":  An Introduction to the Crusades.  The book appears designed for undergraduate courses in medieval history, and can be read alone or in tandam with a sourcebook on the crusades edited by the said Dr. Allen and her distinguished colleague Emily Amt, as previously plugged on this blog in October 2014.

My first real introduction to the crusades was reading Stephen Runciman's three-volume history a couple of decades ago ("The First Crusade," "The Kingdom of Jerusalem," and "The Kingdom of Acre"), a beautifully written, clearly sourced and straightforward history published in the 1950's.  It can now fairly be called a classic, but it is also a daunting read, and my sense, when reading it, was of being largely overwhelmed by the flood of unfamiliar names in a distant century among foreign mores, telling a detailed story of murky motivations, multiple military campaigns over generations, repeated clashes of class and culture--peasant and noble, Frank and German, Arab and Persian and Turk and Mongol--in what looked at first like a lengthy narrative but which, in retrospect, was a lot of event in a small space.

Dr. Allen's Introduction is, more modestly, a true introduction.  Its first sixty pages contain the briefest summary of the events of the crusades, followed by chapters on the logistics of going on crusade (and living through one), the details of medieval combat, a case study on the negotiations between Richard and Saladin regarding Jerusalem in the Third Crusade, and a final section on how the crusades have been understood and rhetorically used, from the Reformation to the present.

There are maps, the occasional half-page topical "box" (on, for example, Prester John, or the Children's Crusade), and, toward the end, a 6-page chronology, an 11-page glossary, and an 8-page "Who's who."  It's the kind of thing that I wish I had had handy when reading the "God's Plenty" of Runciman.

The Introduction can be read alone, or, as noted above, in tandem with the 400-odd pages of the Reader, a good way of putting contemporary and eye-witness flesh on the bones of the Introduction.  And for those whose appetite is then whetted for one of the most controversial, most colorful, and most consequential encounters in our history, it provides a good solid foundation for further reading.

I highly recommend it.  But, admittedly, I am not without my bias in favor of the distinguished author. 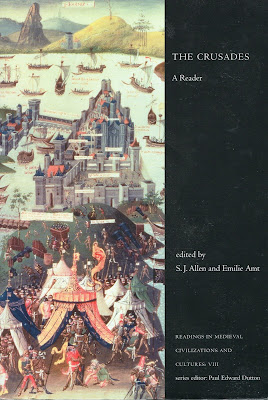 Posted by rick allen at 5:42 PM No comments: