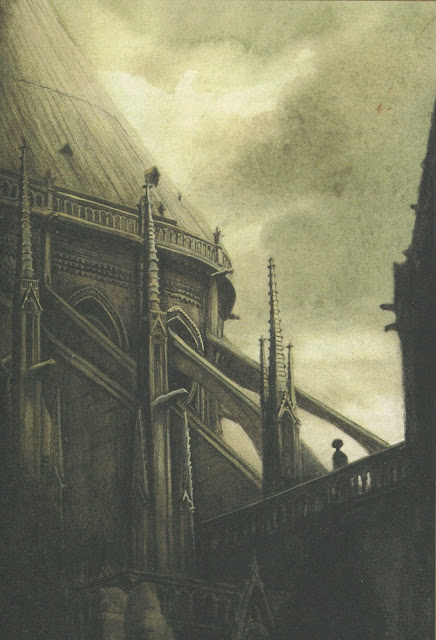 I have been reading Victor Hugo's Notre Dame de Paris.  In a 2009 post, having just completed Hugo's Les Misérables, I noted Hugo's love of digressions.   Notre Dame isn't as chock-full of them as Les Mis, but Hugo engages in some major frolic and detour in the second chapter of Part Five in a section entitled "Ceci tuera cela."

"This will kill that."  The printed book will kill architecture.

Here Hugo exemplifies a favorite approach to discursive writing:  take a simple, smart observation and then run it into the ground.

It is a commonplace, I think, to see the great churches of medieval Europe as the books of the illiterate, the great bibles setting out, in light and sculpture and music and stained glass, the stories and dogmas of the faith.  I say it is a commonplace because I'm not sure that it was so in Hugo's day.  And though Hugo himself was very much the advocate and harbinger of a liberal and progressive era, he was unusual in his appreciation of the beauties of the Gothic, and arguably working against his progressivism in practicing, and arguably, in France, inventing, the genre of the historical romance.

But he sees the book and the edifice in opposition.  And he puts the observation in the mouth of Claude Frollo, his clerical villain, foreseeing the satirical jibes of Erasmus eliding into the unprecedented waves of polemic and counter-blast of the Protestant Reformation, all made possible by the printing press.  It is an accurate observation, but it stands independent of the status of architecture.

And obviously building didn't stop.  So Hugo turns the argument from the destruction of architecture to its decadence, asserting the inferiority of the Renaissance style to the Gothic (in this he was famously seconded by Ruskin).   The great domed churches he reduces to a formula, "the Pantheon heaped on the Parthenon,"  again and again and again, paying tribute to Michelangelo's St. Peters as the one work of genius that inspired the series of imitations.  But the formula, however clever, hardly accounts for the originality of the centuries of Renaissance and Baroque and neo-classical work that followed.

Hugo also can't help but acknowledge the monumental works of literature that tended to define their culture.  Are the great epics of Homer somehow less constituative of the Greek spiriti than the Parthenon?

It's in that ambiguity of "press" and "book" that Hugo arguably comes a-cropper.  There is a real change between the medieval and modern world that is less the case of press destroying architecture than of an explosion of options and expressions that makes the relative uniformity of the pre-medieval world no longer an option.  The pre-modern world tended to have what can be called a narrower canon, a more manageable set of fundamental writings, a characteristic arguably attributable in part to the limited dissimulation of written work in manuscript.  And similarly, the magnificent architectural monuments of the pre-modern world were part of a comparably limited "canon."  Medieval Paris was full of churches, but each represented more than a generation of devoted work.  Our modern building can't shoot up as quickly as an edition of a new book can be printed.  But it's difficult to think of any architectural project of the last four hundred years that would have been undertaken if, like Paris' Notre-Dame, or Florence's Santa Maria di Fiore, its completion was not expected for more than a century.

The technical power of the modern world makes more possible faster.  Whether more and faster leads to better is an open question.  Happily, the book never killed the edifice.  But both acquired an arguably less massive inertia, reflected in the accelerated series of revolutions that perhaps best define the modern world. 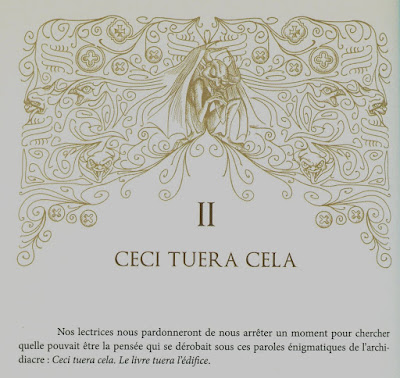 Posted by rick allen at 5:03 PM No comments: