Revolt in the Desert 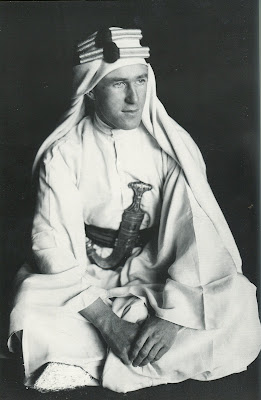 A hundred years ago the First World War was raging.  Our first mental image of that conflict is probably the landscape of trench warfare in Western Europe:  Unbroken ditches running mile after mile, no-man's-land, blighted landscapes, barbed wire, and waves of doomed men going over the top.

Yet there were other theaters in that war, no less brutal, no less senseless, but whose foreignness won them a pass in the contemporary imagination.  I'm thinking, of course, of the Arab Revolt, a movement encouraged by the British against Germany's eastern ally, the Ottoman Empire of the Turks, chronicled most famously in T.E. Lawrence's Seven Pillars of Wisdom.

Lawrence remains an enigma.  Solitary in life and unmilitary in demeanor, he took a new name and sought anonymity after publishing his great memoir, completing his translation of the Odyssey just before dying in a motorcycle accident on a quiet English road.

A couple of decades ago I read Revolt in the Desert, Lawrence's abridgment of Seven Pillars.  He lost his first manuscript of Seven Pillars, and when rewritten made it available only in a severely limited edition.  Its reputation created a demand that Lawrence answered with Revolt, a version that read like a traditional account of a military campaign.  What was left out of Revolt, and what makes Seven Pillars such a compelling read, is Lawrence's self-revelation--not only his eccentric observations on Arab life, but his whole consciousness of duplicity in encouraging one people's revolt for his own people's advantage.  James Morris has called shame the leitmotiv of Seven Pillars, and that sense of play-acting in a deadly serious game permeates the book with an omnipresent unease.

A soldier, but also an artist, as noted by Jean Villars at the beginning of his biography of Lawrence:

Seven Pillars reads much of the time like other classics of exploration.  It describes, day by day, travel through the desert: the geography of well and oasis; the composition of ground:  sand, slate or flint; the hills and the wadis; the unrelenting sun.  In this it is reminiscent of books like Burton's Lake Regions of East Africa, or Darwin's Voyage of the Beagle (an expedition as much geological as biological).   Here is Lawrence observing the difference between male and female camels:
"Arabs of means rode none but she-camels, since they went smoother under the saddles than males, and were better tempered and less noisy:  also, they were patient and would endure to march long after they were worn out, indeed until they tottered with exhaustion and fell in their tracks and died:  whereas the coarser males grew angry, flung themselves down when tired, and from sheer rage would die there unnecessarily."

These kinds of narratives make it a classic of travel writing.  But it also a war memoir:

"Blood was always on our hands; we were licensed to it.  Wounding and killing seemed ephemeral pains, so very brief and sore was life with us....Bedouin ways were hard even for those brought up to them, and for strangers terrible:  a death in life.  When the march or labour ended I had no energy to record sensation, nor while it lasted any leisure to see the spiritual loveliness which sometimes came upon by the way.  In my notes, the cruel rather than the beautiful found place....Our life is not summed up in what I have written (there are things not to be repeated in cold blood for very shame); but what I have written was in and of our life.  Pray God that men reading the story will not, for love of the glamour of strangeness, go out to prostitute themselves and their talent in serving another race."

That last line highlights the irony of Lawrence's contemporary fame.  He is best known from David Lean's extraordinary film "Lawrence of Arabia."  In the film he is presented as virtually taking leadership of the Arab Revolt, a textbook instance of what is sometimes called the "Mighty Whitey" trope.  In his memoir Lawrence, not an extraordinarily modest man, always emphatically insists that he was a collaborator in an operation that he in no sense led.

So the film tends to make Lawrence an unabashedly romantic character, a role he sincerely tries to shun in his memoir.  But it must be said that the film does convey some sense of Lawrence's inner doubts, often amounting to a kind of agony.

"[T]he effort for these years to live in the dress of the Arabs, and to imitate the mental foundations, quitted me of my English self, and let me look at the West and its conventions with new eyes:  they destroyed it all for me.  At the same time I could not sincerely take on the Arab skin:  it was an affectation only.  Easily was a man made an infidel, but hardly might he be converted to another faith.  I had dropped one form and not taken on the other, and was become like Mohammed's coffin in our legend, with a resultant feeling of intense loneliness in life, and a contempt, not for other men, but for all they do."

Lawrence wrote at a time when Arabia was far more exotic than it is now.   Our entanglement with the middle east is not only more pervasive than it was a hundred years ago, but the terms are profoundly different.  One of the perhaps surprising characteristics of Lawrence's war was the tangential role of Islam.  This was a conflict between Arabs (allied with English) and Turks (allied with Germans).  The creed which Lawrence preaches is Nationalism, a cause nipped in the bud after the war by the French/English carve-up of the middle east, and made largely irrelevant today by the overriding significance of the struggle between Sunni and Shi'ite interests (and, of course, the continuing resentment over Israel).

Another contemporary facet of Lawrence's story is the contrast between old England's encouragement of various linguistic competences and contemporary monolingual America.  Lawrence had spent three years traveling in Syria writing his Ph.D. thesis on crusader castles.  He was not alone among British officers in his ability to speak Arabic.  He was fortunate, perhaps, that the proliferation of dialects prevented his learned Arabic from exposing him as an Englishman.  In the following excerpt he has some fun with his own abilities, in the context of Auda, the leader of the expedition against Akaba, chanting on dark nights to guide his comrades through unfamiliar territory:

"On this long journey Sherif Nasir and Auda's sour-smiling cousin, Mohammed el Dheilan, took pains with my Arabic, giving me by turn lessons in the classical Medina tongue, and in the vivid desert language.  At the beginning my Arabic had been a halting command of the tribal dialects of the Middle Euphrates (a not impure form), but now it became a fluent mingling of Hejaz slang and north-tribal poetry with household words and phrases from the Limpid Nejdi, and book forms from Syria.  The fluency had a lack of grammar, which made my talk a perpetual adventure for my hearers.  Newcomers imagined I must be the native of some unknown illiterate district; a shot-rubbish ground of disjected Arabic parts of speech.  However, as yet I understood not three words of Auda's...."

As we continue to struggle, today, with finding the right relationship with our middle eastern neighbors, Lawrence's great account of an early twentieth century collaboration, and a great betrayal, might just possibly contain a few lessons from which we might profit. 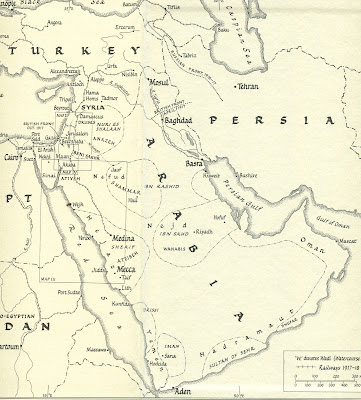 From the preface to The Third Crusade


In the year of the Incarnate Word of our Lord 1187, when Pope Urban III held the government of the Apostolic See and Frederick I was emperor of Germany; when Isaac II was reigning at Constantinople, Philip II in France, Henry II in England and William II in Sicily, the Lord's hand fell heavily on His people, if indeed it is right to call those "His people" whom uncleanness of life and habits, and the foulness of their vices, had alienated from his favor.  Their licentiousness had indeed become so flagrant that they all of them (casting aside the veil of shame) rushed headlong in the face of day into sin.

It would be a long task, and incompatible with our present purpose, to disclose the scenes of blood, robbery and adultery which disgraced them (for this work of mine is a history of deeds and not a moral treatise); but when the Ancient Enemy had diffused, far and near, the spirit of corruption, he more especially took possession of the lands of Syria and Palestine, so that other nations now drew an example of uncleanness from the same source which formerly had supplied them with the  elements of religion.  For this cause, therefore, the Lord, seeing that the land of His birth and place of His Passion had sunk into an abyss of turpitude, treated with neglect His inheritance and suffered Saladin, the rod of His wrath, to put forth his fury to the destruction of that stiff-necked people; for He would rather that the Holy Land should for a short time be subject to the profane rites of the heathen than that it should any longer be possessed by men whom no regard for what is right could deter from things unlawful.
Posted by rick allen at 4:25 AM No comments: