Our "Muslim Problem," Part Three: Islam as a Civilization 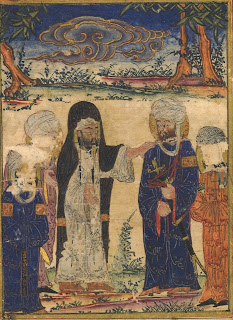 Every religion has some effect on its social and political environment.  Christianity and Islam are religions that obviously have had something more than "some effect."  The Islamic religion has indisputably formed a large, distinctive "world-historical" civilization.  For some thirteen hundred years it has held sway over a great swath of the globe, beginning in northern and western Africa, through the "hot deserts" of the Near East and Arabia, up across the Iranian plateau, into northwest India and through the "cold deserts" of  Central Asia and China.  And it would tempting to call it the "Civilization of the Great Deserts" were it not for the fact that the largest single Islamic nation is Indonesia, an equatorial island archipelago between the Pacific and Indian Oceans.

Just as Latin and its progeny shaped Western Christendom, the Arabic language has been a unifying factor, sometimes displacing older languages (such as Coptic in Egypt), but more often supplementing the native languages of Berbers and Persians and Turks.

It some sense I've been a little paralyzed by the apparent hubris of summarizing Islamic civilization in a blog post.  I have little real familiarity, other than some grasp of the history--much of it through interaction, positive and negative, with Christendom--and odds and ends that have become popular in the West--I'm thinking of the Arabian Nights--and some familiarity with the impressive philosophical tradition that both bridged the gap between Aristotle and Aquinas and raised in a unique way how we came to think about existence and essence, necessity and contingency, eternity and temporality.  No decent account of Western philosophy would be complete without the names of Al-Farabi, Avicenna, Al-Ghazali and Averroes.

In addition to the high culture of Islamic civilization--literature, philosophy, theology, mathematics, medicine, architecture--there is the complex inheritance of the cultures that adopted Islam--the desert-dwelling Beduin of Arabia, the cosmopolitan Arabs of Egypt, the Persian successors of the Achaemenids and Parthians, the various Turkish sultanates all along the Silk Road.  There are also the distinctive political cultures of the great dynasties and califates--the Umayyads of Damascus, the Abbasids of Baghdad, the Fatimids of Cairo, the Almohads and Almoravids of Al-Andalus, the Mughals of Delhi, and the empire of the Ottoman Turks, who eventually appropriated to themselves the riches of Byzantium.

Because these were Islamicized cultures and polities, we associate their laws and folkways, their virtues and vices, their characteristic successes and failures with Islam.  The prohibition against images has been very widespread in Islam, for instance.  But I don't think it's in the Qur'an.  And it obviously hasn't been universal (see image above).  But all Islamic governments issue passports with photos.  Most allow televisions and movies.  For all our ideas about what Islamic civilizations require, they change and make allowances like almost all polities.

Now there's no question that Islam has more often than not been bound up in what we would consider secular governance.  And, from my perspective as a Christian, Christianity benefited from existing its first three centuries as, not only a non-governing faith, but an outlaw faith.  Admittedly, during the next fifteen hundred years the Christian faith became tightly interwound with secular governance, but there was always a sense of separate roles, and ecclesiastical independence, and the decoupling of such long-standing entanglement over the last couple of centuries suggests to me that the same thing can happen with Islam.  It's not a necessary development; I don't believe that hardly anything human must necessarily happen.  But the mere existence of Islam outside of the Islamic world means that an Islamic government isn't a necessary condition to being a good Muslim.

So, is there a reason to fear that Muslims, coming from countries governed by pervasively Islamic governments (by profession, at least), cannot be good Americans, and live under a religiously-neutral government?  I don't think so.  Will Muslims bring new and different perspectives to our social life?  Of course.  Would I judge all of them to be positive?  Certainly not.  But might they contribute as well to the improvement of American life from their unique experience, as so many immigrant groups have done?  Undoubtedly.