It's not that most of us don't get the concept.... 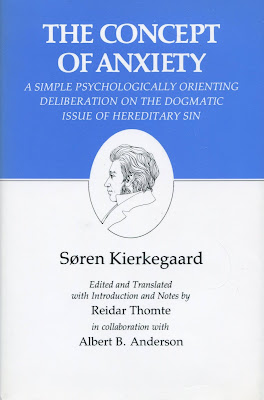 It was on the occasion of moving books from the garage back into my office, after a lengthy HVAC project, that I spotted my old Kierkegaard set, mostly picked up in the eighties and nineties when Princeton was first publishing these new translations, and I ruefully noted how few I had finished.

The Concept of Anxiety has the reputation of being one of Kierkegaard's more difficult works, though it is also mercifully short.  But--anxiety.  It's something most of us know.  "Lives of quiet desperation," as Thoreau memorably put it.  But of course for Kierkegaard it has a particularly unique significance for the psychological and dogmatic question of hereditary sin, and this obscure treatise has unexpectedly had a tremendous influence on the way we see human existence.

"Existence" of course is meant to point to "existentialism," but what I don't want to do with Kierkegaard is to treat him too much as a "precursor," as someone who is important because he led to something that he might have disdained as yet another "system."  Yes, of course, Kierkegaard had a great influence on the development of "existentialism," but he was also a seminarian, a Lutheran who never took orders, who in fact died refusing the sacrament, but was passionately, almost pathologically concerned with the question of what it means to be a Christian.

The difficulty of the book stems, I think, from two things.  First, like many of his contemporaries in the mid-nineteenth century, Kierkegaard is writing in the wake of Hegel.  The introduction to the book is a long rolling-of-the-eyes about Hegel's Science of Logic, how it doesn't understand the first thing about logic, especially and specifically how it erroneously brings logic to its natural end in actuality.  The reader thinks, "Well, this may or may not be so, but how does this introduce me to the subject matter of The Concept of Anxiety?'  Kierkegaard does, in fact, eventually come around to this, but it's not express, and it's a long time coming.

The second difficulty is with Kierkegaard's idiosyncratic categories:  the moment, the leap, repetition, presupposition, positing.  Perhaps some of these are Hegelian.  Some probably are.  But they take some getting used to.  And even those we think we know can fool us (the phrase best associated with Kierkegaard is the "leap of faith," which I've never yet run across in his books.)

The starting point for the discussion proper is a subject arcane in Kierkegaard's day, and almost unintelligible in our own:  how Adam brought sin into the world from a prior state of innocence.  Adam's prior innocence is, to Kierkegaard, too fantastic for comprehension.  If Adam was so constituted, he was so far outside of the human race that his actions could hardly have affected his descendants.  But, after identifying the individual with the race, Kierkegaard asserts that each human being brings sin into the world, as Adam did, from a prior state of ignorance and innocence.  But what conditioned, and conditions, that transition, from innocence to guilt?  Anxiety.

Now I don't know a word of Danish.  But I know some German, and Kierkegaard sometimes substitutes the German Angst for whatever the Danish word is.  (I miss the older English translation, The Concept of Dread--so much more visceral, but perhaps not quite as accurate).  And I wonder if the related Danish word works like the German.  In English we say "anxiety about" or "fear of."  In German one says "Angst vor," "Angst before."  Perhaps in Danish, too.  In any case, the anxiety that accompanies one from innocence to guilt is not an anxiety before something, but rather an anxiety before nothing.  When in English we say someone is afraid of nothing we mean he is fearless.  But for Kierkegaard, it is the nothing which is most terrifying.  And here we perhaps see what he was getting at in taking Hegel to task for the exaltation of "actuality."  For what makes the human spirit is not actuality, but the nothing, the absence that is possibility.

OK, a step back.  I do think some Hegelian background helps, to the extent I've understood it correctly.  To distill it to a sentence, history is the self-realization of Spirit, whose developing essence is freedom.  We are all, mostly unwittingly, Hegelians, because we believe that history is progress toward freedom, that the arc of history bends that way, that it makes sense to talk about being on the side of history, that it is the most extreme folly to attempt to "turn back the clock." Freedom is what it's all about, and it's coming.

So in innocent anxiety one freely makes the leap into sin, and sin comes into the world, with Adam, with everyone.  This is the secret of hereditary sin as preached by dogmatics, and as demonstrated by psychology.  One does not have to sin, but one leaps into it in and through anxiety.  We are dazzled by the nothingness that shades possibility.

So, in a frequently quoted sentences from this book, Kierkegaard observes that "anxiety is the dizziness of freedom, which emerges when the spirit wants to posit the synthesis and freedom looks down into its own possibility, laying hold of finiteness to support itself."  Where Kierkegaard goes from here is admittedly hard to describe, since I'm still far from sure I'm following him.  But there seems to be four further possibilities, once we have lost innocence.

There is, first, the strategy to retreat into "spiritlessness."  If to be human is to be a human spirit, and to be a spirit is to be free, and to be free is to be anxious--then perhaps it's not so great a thing to be human.  To renounce freedom, to become a thing, this is one way out.  And this, I think, is a thread picked up by later secular "existentialists," the notion that rigors of freedom can be too much for the mass of men, who retreat into inauthenticity, into Alltaglichkeit.

But there are also two states--possibly two stages--of the entry into guilt, the first being anxiety before evil.  Guilt is indeed engaging in sin in actuality, in having sin enter the world anew, but the creation of this new state does not exclude further possibility, but only orients it to a deepening guilt.  But this anxiety before evil, open as it is to a deepening evil, is still redeemable, unlike the next stage, which Kierkegaard calls "the demonic," anxiety before the good.  Here the model rests on the encounters of Jesus with possessing devils in the gospels, who fear him, and ask a characteristic question:  "What have you to do with me?"  It is what Kierkegaard calls an "enclosing reserve," an isolation and succumbing into guilt such that the good is more fearful than the evil, and anxiety acts to reinforce guilt rather than keep one anxious about it, as in the prior stage.

But did I mention that Kierkegaard is also a Christian?  He is a highly unconventional one, professing a highly demanding Christianity, one that is there in such plain sight in the gospels that we work night and day not to look at it.  Nevertheless Kierkegaard does not merely leave us with anxiety; he proposes faith as the means by which it saves us.

"Anxiety is freedom's possibility, but only such anxiety through faith is absolutely educative, because it consumes all finite ends and discovers all their deceptiveness."  Faith teaches that "possibility is the weightiest of all categories."  And further:  "By faith I understand here what Hegel somewhere  in his way correctly calls  the inner certainty that anticipates infinity.  Whenever the discoveries of possibility are honestly administered, possibility will discover all the finitudes, but it will idealize them in the form of infinity and in anxiety overwhelm the individual until he again overcomes them in the anticipation of faith."

Well, here you begin to suspect, rightly, that I quote extensively to hide the fact that I'm at my wit's end to understand exactly what Kierkegaard is getting at in assigning to faith the task of making possibility a teacher, a teacher about finitude and infinity, and somehow thereby freeing us from anxiety's empire.  This is a far cry from Luther, of course.  But there is a similarity of pattern.  We fear.  We cry out.  And we eventually come to rest in the infinite when the finite isn't sufficient.
Posted by rick allen at 8:53 PM 3 comments: